Living at the Intersection of Grace, Grits and the Ancient Faith... 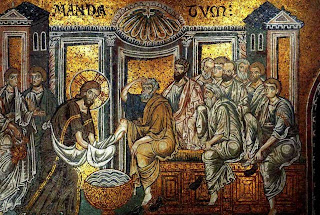 Joel I. Barstad, Ph.D.
St. John Vianney Theological Seminary
Denver, Colorado
April 3, 2006
Revised August 29, 2008
S.B. Note: This is quite possibly the finest, most comprehensive and balanced treatment of this subject that I have run across. There is much here worthy of consideration for both Eastern and Western Christians. Many years to Dr. Barstad  and kudos to him for such a substantive contribution to the ongoing discussion of the role of monogamous married and celibate clergy.

There are no footnotes in this essay. It is not my intention to enter into polemical relationships with other authors or to make complex historical arguments. Such work is important, but here my aim is to extract and address, as simply as possible, the essential arguments and realities of clerical identity as I understand them. Plenty has been written on the origin and diverging development of the Eastern and Western disciplines regarding priestly marriage and celibacy. As long as the focus of such research remains the defense of one tradition over against another, and as long as each tradition articulates its identity primarily in terms of what distinguishes it from the other, there will be no reconciliation. What is needed is to discover and focus on an element of vital concern to both traditions, something central enough to both to serve as a common point of affirmation and shared identity.
In these meditations, I have tried to stay close to the Scriptures, not because they are the last word—on the contrary, they contain many tensions and ambiguities that must be wrestled with, balanced, and resolved in concrete ways for circumstances that the inspired authors never imagined—, but because they are the first word, to which the Church perennially returns, a place where struggling brethren can meet one another in hope. Whatever ambiguities and tensions the Scriptures contain are creative and life giving. Wrestling with God Jacob found himself changed, given a new identity that prepared him to meet his estranged brother.
I would be remiss, however, if I did not acknowledge here my debt to Monsignor Luigi Giussani (1922-2005). His teaching on such matters as authority, obedience, and virginity has had a profound influence on my thinking. I make no claim that his views are represented in these pages, only that the thoughts expressed would have been very different had I not met him.
1
Abbas qui praeesse dignus est monasterio semper meminere debet quod dicitur et nomen maioris factis implere. Christi enim agere vices in monasterio creditur, quando ipsius vocatur pronomine.
—Regula sancti Benedicti 2:1-2.
In the ecumenical age in which we live, an adequate theological articulation of priestly identity must do justice to both the Latin tradition of priestly celibacy and the Eastern tradition of a monogamous clergy.
The tensions between those two traditions have been with us for a long time. Already at the end of the Seventh Century at the Synod in Trullo, one hears a scornful note in the Eastern attitude toward the Latin discipline. And in the Twentieth Century the suppression of the Eastern discipline among emigrant communities of Eastern Catholics in North America at the insistence of their Roman neighbors merely expressed what to many still appears as an obvious practical impossibility of the two traditions coexisting in the same place. Such impossibility, however, is hard to defend theoretically now that a general council, the canon law governing Eastern Catholics, and a universal catechism affirm the “honorable” legitimacy of both disciplines (Vatican II, Presbyterorum ordinis 16; CCC 1579, 1580; CCEO 373). Moreover, there has been a partial restoration of a married clergy within the Roman rite itself in the form of a married deaconate which carries an increasing share in the Church’s pastoral ministry, not to mention the exceptions granted Anglican and Lutheran married clergy who enter communion with Rome and receive permission to be ordained and to serve in the Roman rite.
In fact, in less than a century, even within the Catholic communion, the tables have turned and the Latin discipline finds itself on the defensive, at least in the sense that those who have the duty of fostering that discipline must respond to more and more insistent demands from their own faithful for a wholesale abandonment of the traditional discipline and find themselves struggling to articulate its value persuasively enough to attract and keep vocations. These changed circumstances, however, do not rise from a new awareness or expansion of Eastern Christian experience, but from a cultural context conditioned by centuries of Protestant and secular repudiation of celibacy itself. In responding to this cultural context, however, it is important to make a distinction between the mandatoriness of priestly celibacy and thevalue of priestly celibacy for the Church lest the value of Eastern tradition and experience for the universal Church be lost.

"When in Rome, do as you done in Milledgeville." Flannery O'Connor